In this example we will create a model of a hospital. The demographics involved will be;

Members of the staff and home demographics will move along the stages of the lurgy according to lurgy4.json. Hospital patients will move through two hospital states, which we will refer to as H1 and H2. These are defined in the file lurgy_hospital.json, which you should create and copy in the below;

The aim of the model will be that 20% of those suffering in the I2 stage of lurgy4.json will be moved to the H1 stage of lurgy_hospital.json, and will then progress to H2 and then R in the hospital.

We will next set that 1% of the worker population are hospital staff, while, initially, nobody has the lurgy, and so there are no hospital patients. We can set this using the file demographics.json, which you should create and copy in the below;

Next, we need a mixing function that will model the interactions between hospital staff, patients and the general population. We will use the following interaction matrix;

The staff demographic are taking lots of precautions, and are not exposed to the home demographic, and only lightly exposed to other staff or members of the patient demographic (matrix values are 0.1).

Finally, the patients group are isolated from one another, and so do not infect one another. At the moment this is moot, as all patients in this model are already infected. However, you could add a susceptible patient population who do not have the lurgy, and then use this final element in the matrix to control the force of infection between patients.

This is not an entirely realistic interaction matrix, but is set up to demonstrate how the only route of infection of staff is from patients.

To use this interaction matrix, create a mixer in mix_hospital.py and copy in the below.

This is essentially an identical mixing function as that used in the shielding example.

Note that we are using merge_using_matrix(). This may not be the right choice depending on how we want the population dynamics to mix, e.g. merge_matrix_single_population() or merge_matrix_multi_population() may be a better choice. See here for more information.

Next, we want to make sure that we have output the populations in the H1 and H2 states. We can do this by creating a custom extractor that writes the populations of all of the disease stages for just the patients demographic to a file called patients.csv. To do this, create the file extract_patients.py and copy in the below;

The new part of this example is that we need to add a move function that will move 20% of individuals who are in the I2 stage to hospital, in the H1 stage. We can do this by writing a move function into the file move_hospital.py, which you should create and copy in the below;

This move function returns go_stage(). This is very similar to go_to(), except you also specify the from_stage and to_stage, which are the stage(s) to move from, and the stage to move to. In this case, we will move 20% of individuals from the I2 stage from the home and staff demographics, which is stage 4 of lurgy4.json. We will move these individuals to stage 2, which is H2, in the patients demographic.

Now this is set, we can run the model using;

You should see that the epidemic starts in the home demographic, with no infections in staff until after a number of the more ill home individuals are moved to hospital as patients. In this model, the ~70,000 staff are overwhelmed with millions of patients. This means that, despite their care, and the lack of interaction with home, all of the members of the staff demographic become infected within the first ~130 days of the epidemic.

You can plot this using the command; 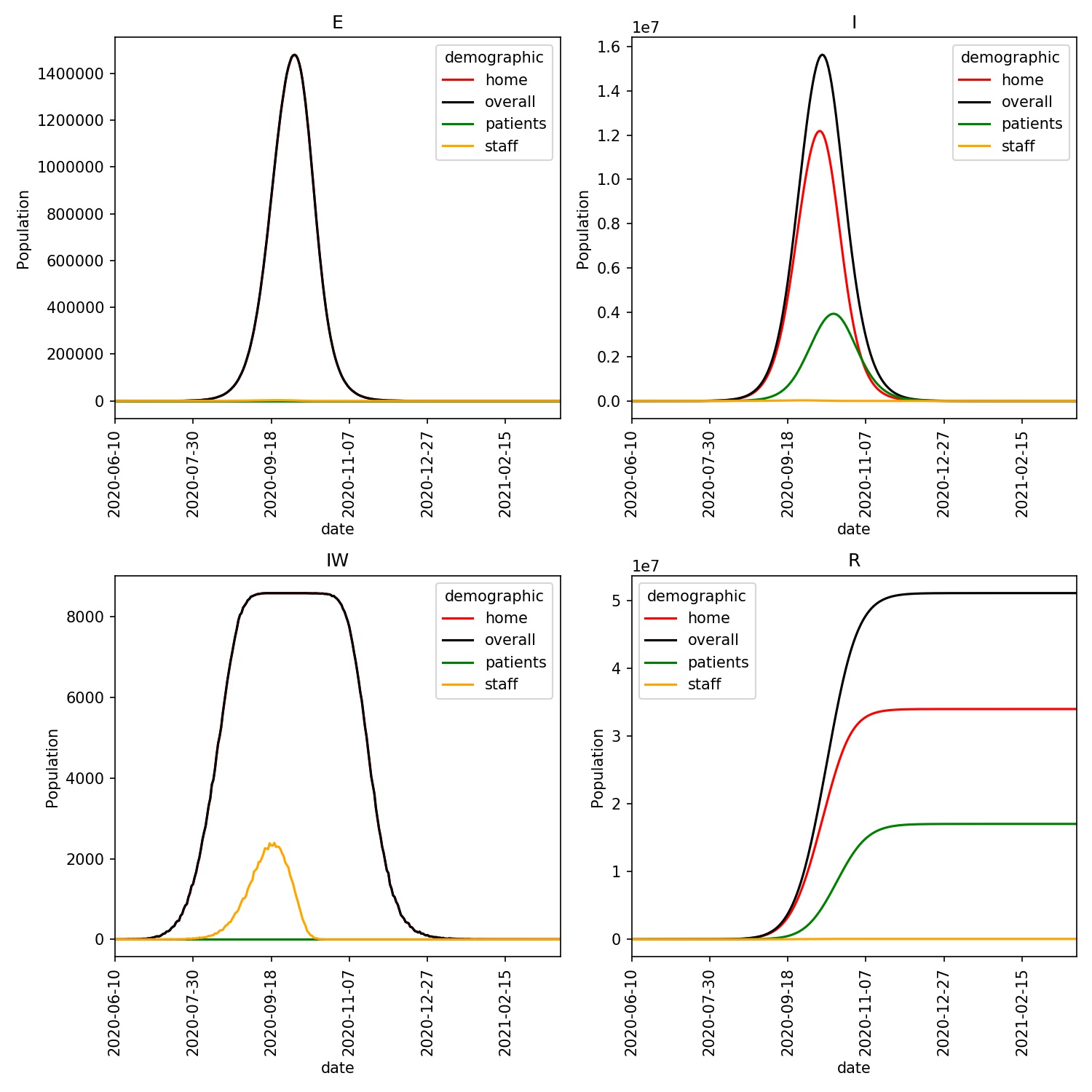 You can see that the infections for the patients lag behind that of the general population, as individuals move to hospital at a late stage in the disease, and then remain in hospital for a long time. You can also see in the IW plot how the staff are quickly overwhelmed and are all infected within ~4 months.

In addition to this plot, you will also see in the output directory the patients.csv.bz2 file that was written by extract_patients. We can load this into R, pandas or Excel to find the maximum occupancy in the hospital for the two different stages.

This shows that days 126-130 were particularly difficult, with nearly 4 million patients in hospital, while nearly all staff were infected.